I Took a Food Intolerance Test, and Now I’m Terrified of Everything

My Experience with Allergy & Food Intolerance Tests | An AllergyTest.co Review 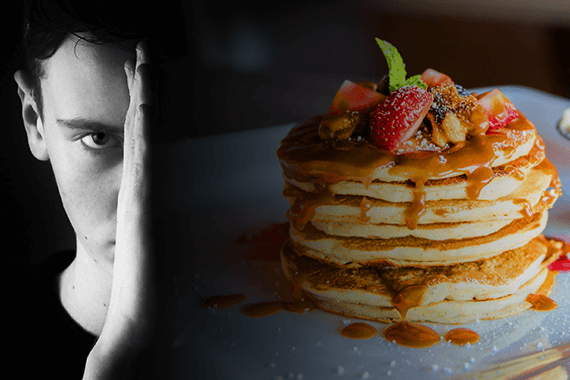 I don’t think much about the food I put in my mouth. Sure, I follow a plant based diet. But I rarely discriminate against any food groups (lookin’ at you, nightshades).

So when AllergyTest.co reached out to offer me a free intolerance test in exchange for an honest review, I was hesitant. But after giving it some thought, I decided it would probably be pretty rad to know which foods my body likes, and which ones make it wanna Swipe Left.

Then, I learned the test also included a nutritional deficiency assessment.

Now we’re talkin’. At that point, I was sold. I travel a lot, and frankly I’m tired of schlepping a small pharmacy with me everywhere I go. I’ve been wanting to simplify, spend less on supplements, and trim—I don’t know— a half pound of capsules from my weekly diet.

So, like every good Virgo, I dusted off my reading glasses and started researching stuff.

Immediately, I thought of my friend and former dentist, Dr. Herrmann. He has written extensively on how something as mild as gluten intolerance can cause leaky gut syndrome, and eventually even cavities.

That example always stuck with me, because my grandmother developed a severe gluten allergy a few months after her 76th birthday. I thought it was fascinating that she enjoyed grains, guilt-free, for nearly 8 decades before developing an allergy. In truth, modern research would say she always had a sensitivity to gluten. She never knew it, though, and she (voluntarily) endured chronic exposure until her mild intolerance developed into something much, much worse.

For that reason alone, I set my ego aside and decided to take this opportunity to learn more about my own food intolerances.

Next, I started looking into the difference between a hair test and blood test for detecting food intolerances. As it was explained to me, a hair test provides a “snapshot” of certain enzymes and other markers that can be used to determine things like:

Quick note on blood tests: I am a big advocate of regular blood screenings to monitor things like hormones, cholesterol, and other vital health markers. In fact, blood screenings are widely considered to be the best means of catching life threatening conditions in their early stages, when intervention is most effective. So hey, get those done regularly.

That being said, I was happy to learn that AllergyTest.co uses a hair test. I found it easy, non-invasive, and virtually pain free.

Sending in My Sample

The first thing I noticed (and appreciated) with this hair test was that I did not have to wait for it to get mailed to me. Instead, all I had to do was print the order form from AllergyTest.co, pluck a few hairs, stick them in a Ziploc baggie, and mail them in.

In all, the whole process took about 20 minutes, including drive time to the FedEx down the street.

I received my results via email after about a week. Results were sent in 3 separate email messages, each with attached test results. Those included:

I enjoyed the format of this results page. Results were broken down into two subsections: Food Items, and Non-Food Items. Then, each item was allocated a percentage. Only items with more than 85% are shown on the results page, because those are the ones that are most likely to cause issues. The higher the percentage, the greater the sensitivity.

I didn’t expect this metric, and it was a pleasant surprise. I love details almost as much as I love food. To me, it seems practical to know I can probably enjoy a handful of Bilberries (88%), but I should never justify a handful of cinnamon (98%). 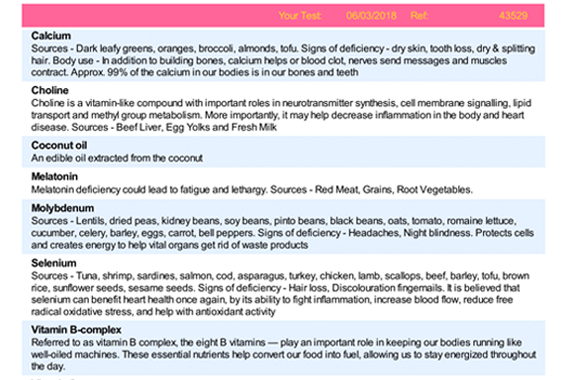 Of all the tests, this one was the test I was most excited to see. I eat well and take care of myself, but I’m extremely active and often feel fatigued. I’ve long suspected that my plant based diet has led to a vitamin B deficiency, and this test confirmed it. But it also alerted me to a more shocking fact:

How could that be? I followed a strict ketogenic diet throughout most of 2016, and I still start my mornings with a tablespoon of coconut oil. A few times a week, I’ll even add MCT oil to my afternoon tea. So how could I possibly be deficient in coconut oil?

I did a little research and, after ruling out the possibility of a false-positive, I came to a startling conclusion: I probably have absorption issues.

Suddenly, the pieces started to align in my mind. Prior to 2016, I ate gluten and processed foods every day. And in college? Well, let’s just say I wasn’t really concerned with “eating clean.” Reflecting back on my childhood, I saw the same story: Gluten with almost every meal, processed foods for almost every snack.

But is gluten an issue for me? To get a better idea, I surveyed my big fat German-Irish family (my dad is 1 of 10, so I had roughly 83 emails to send). Turns out that about 20% of my relatives also experience some sort of reaction when they eat gluten. A handful of others said it didn’t cause a visible reaction, but it didn’t make them feel great, either.

Moral of the story: A Nutritional Deficiency Test tells you what your body is not absorbing.

Not absorbing could mean one of two things:

If you suspect your results indicate the latter, it’s time to pump the brakes and consult a physician. Chances are, you need to take some time to heal your GI tract.

I feel compelled to say that, at this point, I was very happy with my test results. Sure, it seems like I have absorption issues, but I’m happy to take that one on the chin. After all, healing a leaky gut isn’t a terribly difficult thing to do. At least, not compared to…

That’s right. My jaw about hit my keyboard when I opened my Metals Test Results and saw, right at the top, an alarmingly high level of arsenic in my hair. I’ll skip the part where I had an existential meltdown, and instead jump to the part where I decided to take action.

Here is a (certainly incomplete) list of all the things I found that might have contributed to the arsenic in my system. Take a look, because you might be indulging in the same habits/ lifestyle choices:

Overall, my experience with AllergyTest.co was very positive. The entire process was easy, fast, and empowering. Yes, I was shocked by the results of my Metals Test and can no longer enjoy a cup of tea unless I am 100% certain of its origin, steeping method, and composition of the mug in which it’s served. But hey, it beats the hell out of drudging along in blissful ignorance.

Try an Intolerance Test for 20% Off 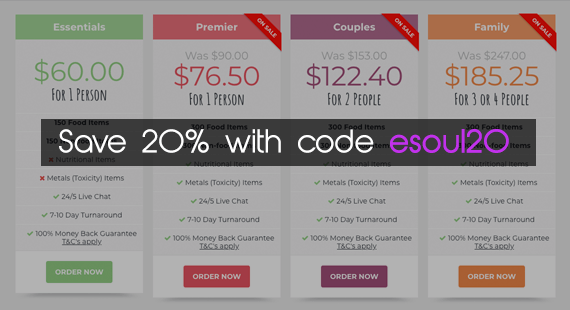 For a limited time, we partnered with AllergyTest.co to offer our readers 20% off their first intolerance test. Just visit AllergyTest.co online and use the code esoul20 at checkout. Don’t forget to drop us a line on Instagram @the_electric_soul to let us know how it goes!